Ember Detection, for detecting fire and hot particles on conveyors and process lines.

Process lines are high risk.  Within minutes, a tiny fire or hot particle could have travelled all the way through your plant, setting fire to other items on its way.

Waste recycling has one of the highest risk types of process line, although sectors such as Coal, Biomass and Manufacturing (even industrial food production) all have high-risk process conveyors.  Ember/Spark detection is the most suitable solution for the protection of these area.

Waste Recycling – Fires on Shredder Outfeed Conveyors and other areas:

A fire in transit doesn’t always start off as a fire.  Sometimes, it can just be an item which has been damaged or overheated in a previous process – although it isn’t flaming, it can contain the  energy to start a fire when it reaches a material stockpile.

In the waste recycling environment, dozens of conveyors transfer your material from one process to the next, potentially spreading a fire.  Key items which are likely to initiate a fire or hot particle include Shedders, Separators and Bag Openers.  These high-energy processes can start a fire in many ways – such as damaging a lithium-ion battery, crushing an aerosol or even just shredding a piece of tramp metal, where the friction can create a hot particle.

If you don’t have ember detection on the outfeed from these processes, a tiny fire risk could go on to destroy your facility.

This incident occurred at a client’s brand new MRF which we protect, processing dry mixed recyclables (DMR) in September 2017.

A 18v lithium-ion battery was shredded, damaging it and causing the battery to arc.  At this time, there was no protection on the shredder outfeed (this wasn’t part of our scope of works).  The battery was carried into a dosing bunker, where it continued to spark and started some small smoldering fires in the material inside the bunker.  The bunker was protected with Flame Detection, and Water Mist deluge installed by Blazequel.

As there were no ‘flames’ in the dosing bunker, the flame detectors did not activate.  The sparking / heat of a damaged battery does not create sufficient energy to activate a flame detector.

On the Dosing Bunker Outfeed (an incline conveyor) we had installed Ember Detection and Water Mist Deluge.  As soon as the the battery passed onto the incline conveyor we detected the risk, activating the deluge.  The site was alarmed, and the risk dealt with safely.

If the ember detectors had not been in place, the battery would have gone into the ballistic separator and following seperators and could have ultimately started a serious fire in one of the final storage bunkers.

This incident is just one of many similar ‘fire saves’ we have made at waste recycling facilities with ember detection.

This incident also occurred at a brand new waste recycling facility which we protect, in April 2018.

A high-speed flame detector was installed at the bottom of a shredder outfeed conveyor, to immediately detect any high risk incidents emitting from the shredding chamber.  Additionally, ember detection was installed higher up the conveyor belt, to ensure that any residual risks such as hot particles were detected before entering the plant.

The ember detector activated, stopping the process and triggering the site fire alarm.  When the client investigated, a crushed and melted ratchet strap (which had clearly got tangled and overheated in the shredded) was found beneath the ember detector.  This object could have had the energy to start a fire in the stockpile which the shredder was feeding, but the flame detector didn’t spot it – as it wasn’t ‘flaming’.

This clearly demonstrates the superior fire safety performance of ember detection at specific transit points on process lines.  Flame detectors are superb in the correct application, but won’t spot a small risk which could go on to become a serious fire.

Contact Blazequel for free advice on how best to protect your facility. 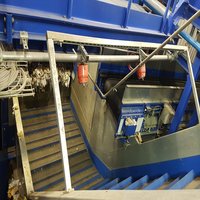 Book your FREE, no-strings-attached Fire Safety Audit to ensure that you’re properly protected from the risk and comply with current fire safety legislation.